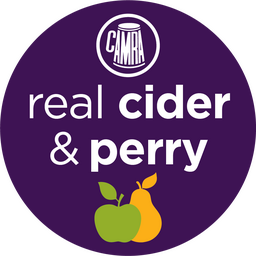 Mike Robinson, Branch Cider representative, ku.gro.armac.bor@redic writes: Cider is a long established British drink, which is produced naturally from apples. Real cider consists simply of freshly pressed apple juice, which has been allowed to ferment. Commercial mass produced ciders are normally served very cold and are often fizzy because of the extra carbon dioxide and other ingredients put into them during manufacture. There are a tremendous number of flavours and aromas in real cider depending on the types of apples used, the proportions of each variety of apple the producers choose to blend and where the fruit is grown in Britain. If you have not tried real cider before you will be pleasantly surprised.

Real perry is made in exactly the same way as cider, from the fermented juice of freshly pressed pears but perry is usually only from pears grown specifically for perry production. Most real ciders and perries are blends of different varieties of apple or pear juices, but a number of single variety (SV) ciders and perries are made using just one type of apple or pear, like Kingston Black (apple) or Blakeney Red (pear).

CAMRA has recently reviewed the definition of Real Cider and Perry.

CAMRA defines Real Cider or Perry as being fermented from the whole juice of fresh pressed apples or pears, without the use of concentrated or chaptilised juices.

CAMRA has for a long time not approved the use of concentrated apple juice in the production of real cider. This is how large commercial producers are able to make 'cider' all year round. The new definition introduces the word 'chaptilised' which, in essence, is 'concentrated fermentable juice' produced by adding masses of sugar to the apple juice prior to fermentation. This is another process carried out by commercial producers to enable them to store large quantities of high gravity alcohol (often at 13%/14% abv) prior to diluting it with water for sale to customers. The new definition means that several large scale producers like, for example, Broadoak, Gwynt Y Ddraig, Lilleys, Snailsbank, Thatchers, Thistly Cross and Westons are no longer considered to produce real cider, even though they may produce still uncarbonated cider.

Locally, real cider and perry is regularly on sale at the Cob & Coal, the Fox & Pine and the Ashton Arms in Oldham town centre; the Flying Horse and the Cask and Feather in Rochdale town centre; and the Trackside Bar and the Thirsty Fish in Bury town centre.

Branch Cider Pub of the Year 2022. The Trackside Bar in Bury, located at Bolton Street Station on the East Lancashire Railway, has recently been judged as the Branch Cider Pub of the Year. This year was a evenly contested event, with Trackside winning by the closest of margins from the Cob & Coal in Oldham (the winner for 2020 and 2021), closely followed by the Fox & Pine in third place. Trackside has much improved its cider offering recently and is considered a worthy winner of the award having been selected by branch members for it's excellent and varied range of real ciders over the past 12 months. The real ciders are sold on gravity from the cellar situated behind bar area and often includes ciders from local northern producers.

Go and visit one or more of the cider pubs mentioned and discover what you have been missing all these years. You will be pleasantly surprised.

If you know of any other pubs in the ROB branch area selling real cider or perry on a regular basis please let Mike Robinson, The Branch Cider Representative know so he can visit them to present them with CAMRA "Real Cider sold here" window sticker and posters.

Thirsty Fish, Bury One real cider is usually on sale, served on gravity from the cellar, often Sheppys,

Trackside Bar, Bury Up to eight various real ciders or perry served on gravity from the cellar, advertised on the chalk board on the left hand side of the bar, however some may be fruit flavoured not using real fruit. The pub also sells Broadoak perry on hand pump which is not considered by CAMRA to be a real perry due to the use of concentrated or chaptilised juices.

Old Post Office Ale House, Castleton Up to two ciders, often Sheppys on gravity from behind the bar.

Hare on the Hill, Littleborough One real cider served by free flow tap from the cellar, often Seacider.

Ashton Arms, Oldham Usually one real cider on sale on handpump, often Duddas Tun or Biddendens. The ciders on sale from the fridge, from Lilleys, are not considered by CAMRA to be real ciders due to the use of concentrated or chaptilised fruit juices.

Cob & Coal, Oldham Up to eight various real ciders and perry served on gravity, by free flow tap from the cool room behind the bar area

Fox & Pine, Oldham Up to six real ciders and perry served on gravity, by free flow tap from the cool room behind the bar area.

Baum, Rochdale It is understood that a Seasider cider may now be on sale, further information would be appreciated

Cask and Feather, Rochdale One real cider on sale, served on gravity from the fridge, often Barkers, usually advertised by pump clip on the bar